Edil Natura Srl, based in Novara in Via Carlo Doppieri 13, started in 2001 and has always operated in the environment sector, specifically in the protection from artificial electromagnetic fields and natural ground radiation.

The “screening” properties of these products act directly on the environment and not on the user, they protect the users indirectly.

This means that these products are not considered “medical grade devices” as from art. 1 of the Law Decree n. 46/97, as interpreted from the Health Minister.

We would like to highlight that Edil Natura srl does not produce medical grade devices nor operates in the medical field, therefore we do not need specific permits to market our products. The only exception is the Skudo® Cream which being a cosmetic lotion is registered as a specific skin care product Rif. CPNP n° 3444604.

Consequently, natural electromagnetism has important effects not only relating to oncological diseases! This said Energy is everywhere and it is dangerous no matter the levels of exposure!
If «high doses induce effects that are clearly the cause of diseases …», then it is clear that any dose can cause negative and pathogenic effects on the human body.

The exposure even to minimal radiation could induce DNA alterations (probabilistic effect) and cause damage to the cells that, if not promptly and suitably repaired, could result in carcinogenic diseases (Check out the official IARC website – click here).

Also check out the statements of the Federal Office of the Suisse Public Health System UFSP.

Introduction on the problems caused by the electromagnetic fields

As well as natural (ionizing) radiation, there are artificial man made electromagnetic (not ionizing) fields (cell phones, WI-FI, low frequency electric systems, 5G extremely high frequencies emissions,…) This radiation is classified as 2B Class by the IARC and are considered as possibly carcinogenic.

At the moment, there is no clear scientific proof of the link between the exposure to electromagnetic fields and the start of diseases such as cancer; but the thought of a connection, especially with regards to certain types of cancers and long times of exposure (even to minimal doses) is still very strong and is the base for many scientific studies.

In 2011 during a television interview on Euronews, the IARC spokesman, Prof. Dr. Kurt Straif, stated that the emissions of a cell phone while in use “alter the flow of blood to the brain and cause other DNA alterations”.

This statement was confirmed by scientific papers published about PET experiments (positron emission tomography) on an International level as well as with regards to our SKUDO® nanoprocessors (see the PET picture).

It is scientifically proven that artificial electromagnetic fields cause biological damage to the cell and its DNA as well as many various problems on the human body (exhaustion, chronic fatigue, tiredness upon waking, headache, localized issues,…).

And also: it was widely recognized at an international scientific level that exposure to electromagnetic fields can adversely affect therapies.

Among the studies that confirm the negative effects of electromagnetic fields, there is a paper from 2017 that confirms how the electromagnetic emissions in extreme radio waves (like the new 5G transmission systems) inhibits the calcineurin, which is very useful to produce T lymphocytes. This results in a weakening of the immune system. Dr. P. R. Doyon was also published on Pub Med (click here to check it out).

Another very interesting paper, that points out the difference between artificial and natural electromagnetic fields and how dangerous they are, was published in 2015 by Dimitris J. Paganopulos (click here to download the article).

Why is it important to protect yourself?

Biological damage caused by the exposure to electromagnetic fields at different levels/time lengths will not definitely cause an illness (deterministic effect) but it will more likely to. Protecting yourself from these biological damages reduces or eliminates the actual risks at their root!

In the instruction leaflets, cell phone manufactures, recommend to keep the cell phone at the minimum distance of two centimeters from the body (forgetting that to operate them you need to use your hands).

As for what concerns the exposure limits, including the artificial radiation, you cannot dismiss that even within the conventionally National and International set limits, the risk of developing an actual disease is still real: The Higher Institute of Health has recently confirmed that, even without modifying the up-to-date limits, “the current scientific evidences…cannot completely rule out the possibility of long-term effects due to a prolonged exposure to low levels…”.

As a matter of fact, no manufacturing company that produces devices/systems that emit electromagnetic fields has up until now explicitly declared that the emissions from their devices even though within the law limits, are “safe for the users’ health”.

It is fundamental to advise the use of these products even before a first assessment of the strength of the actual radiation present in the environment. An actual assessment would cost more than the products and would be superfluous because both natural and artificial radiation are now present anywhere!

As for what it concerns the interferences of the electromagnetic fields on the Traditional Chinese Medicine “acupoints”, when the functioning of an Energy meridian is compromised, it results into the development of an illness or other health related issues. Abundant scientific literature exists around this point. Here is a selection of articles (click here to download the articles).

At last, water also alters its nature when exposed to electromagnetic interferences. We strongly recommend all our website users to read and related articles about this topic (click here to download the article).

Edil Natura srl ​​is an institutional partner of the Technoscienze «PST». To see the document click here

Let us bring you inside the Edil Natura company

Edil Natura srl is a one of its kind manufacturing company led by Nicola Limardo. He can count on the cooperation of a team of researchers and scientists, manufacturing experts and a wide indipendent commercial network.

Its products are sold all over Italy. The company has opted for a direct sale scheme because it offers an affordable product to the final consumer avoiding the traditional commercial model.
Please find the picture of the company hierarchy chart updated in 2017. 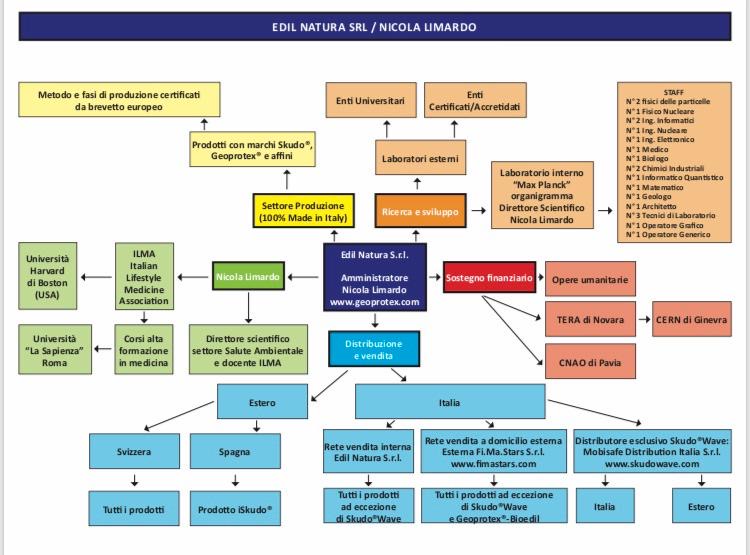 We should mention that each member of staff working for Edil Natura has the knowledge to provide professional advice on any of our products. This is due to the fact that they are the first consumers and they know all the characteristics of our products, providing first hand references and guarantees before the client buys them.

Edil Natura in a company that looks after all the phases of the manufacturing process, Research, Development, Manufacturing and Distribution of innovative solutions to increase the people’s life quality based on three main values: Ethic, Passion and Professionalism.

If you want to get in touch with us to find out more on our products or if you are interested in working with Edil Natura, click the button below to book a phone call and you will be able to speak directly with one of our staff members.

Click on the button below to get in touch with the company, we guarantee to call you back within 72hours!